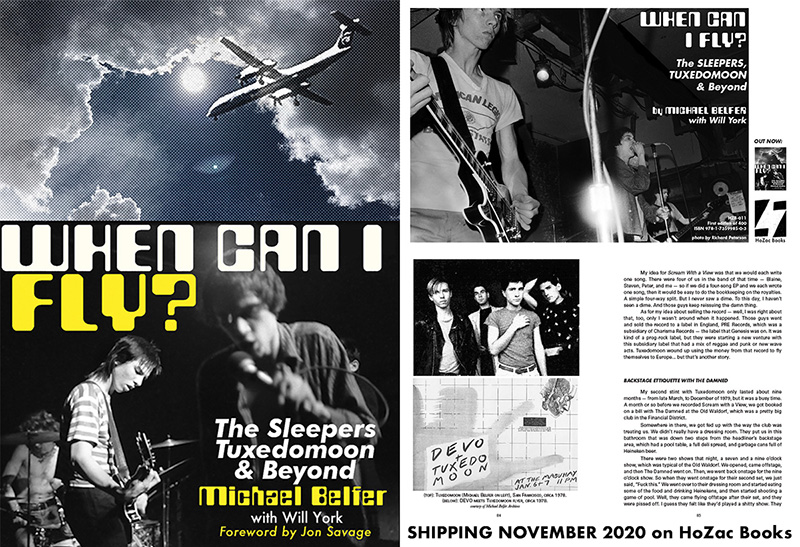 Just when you thought you knew all there was to know about ’70s San Francisco underground music, here we have Michael Belfer- one of the SF scene’s earliest progenitors, who straddled two very different worlds playing guitar in two of the Bay Area’s most creative musical groups, The Sleepers and Tuxedomoon. By far two of the most unique bands in the early San Francisco musical landscape.

When Can I Fly? is a harrowing memoir filled with stories encapsulating the seedy side of the San Francisco punk and post-punk scene in great detail, from the opening of the Mabuhay to the closing of the Savoy Tivoli and every back alley overdose in between. Tracing the earliest roots of The Sleepers in Palo Alto in 1975-76, Belfer was privvy to witnessing the nascent SF punk scene development as his bandmate Ricky Williams (aka Ricky Tractor) was already playing drums in the first lineup of CRIME at the time. This memoir offers a glimpse into the inner workings of the complications of street-level avant-garde musicianship, as well as the drug empire that was fueling the fires within the movers & shakers of the late 1970s in seething detail, and on a few occasions with grotesque precision.

What do Herb Alpert, ‘Joe Boxer’ briefs, Will Shatter’s secret salsa ingredient, Celestial Seasonings tea, and HEROIN all have in common? They all somehow intersect with Michael Belfer amongst the pages in When Can I Fly? – and man, what a ride!

As Belfer’s recollections cover his unusual position of drifting between two well-known working bands, both orbiting around the shadier side of underground musical expression in the uncharted waters of the late 1970s, what’s apparent in hindsight is how both seem so conceptually disconnected from the rank & file punk bands they played alongside at the time. Combining this lurid scene of drug-soaked denigration with the most mind-bending experimental sounds of the Bay Area during the era, When Can I Fly? portrays the side of the SF punk story lost in the shadows of addiction and compulsion, and almost even breaches into Breaking Bad territory at some points.

Fortunately, When Can I Fly? has been blessed with a plethora of incredible and previously unseen photography from the Richard Peterson archive (Search & Destroy magazine) covering Belfer’s intertwining tenures in both The Sleepers and Tuxedomoon, as well as a wealth of rare flyers and photos by James Stark, Ruby Ray, and Sue Brisk. And with a Foreword by none other than Jon Savage as well as an Afterword by Hunt Sales (Iggy Pop, David Bowie, Todd Rundgren, and son of Soupy!), this is yet another sickening volume of underworld legend you shouldn’t miss.