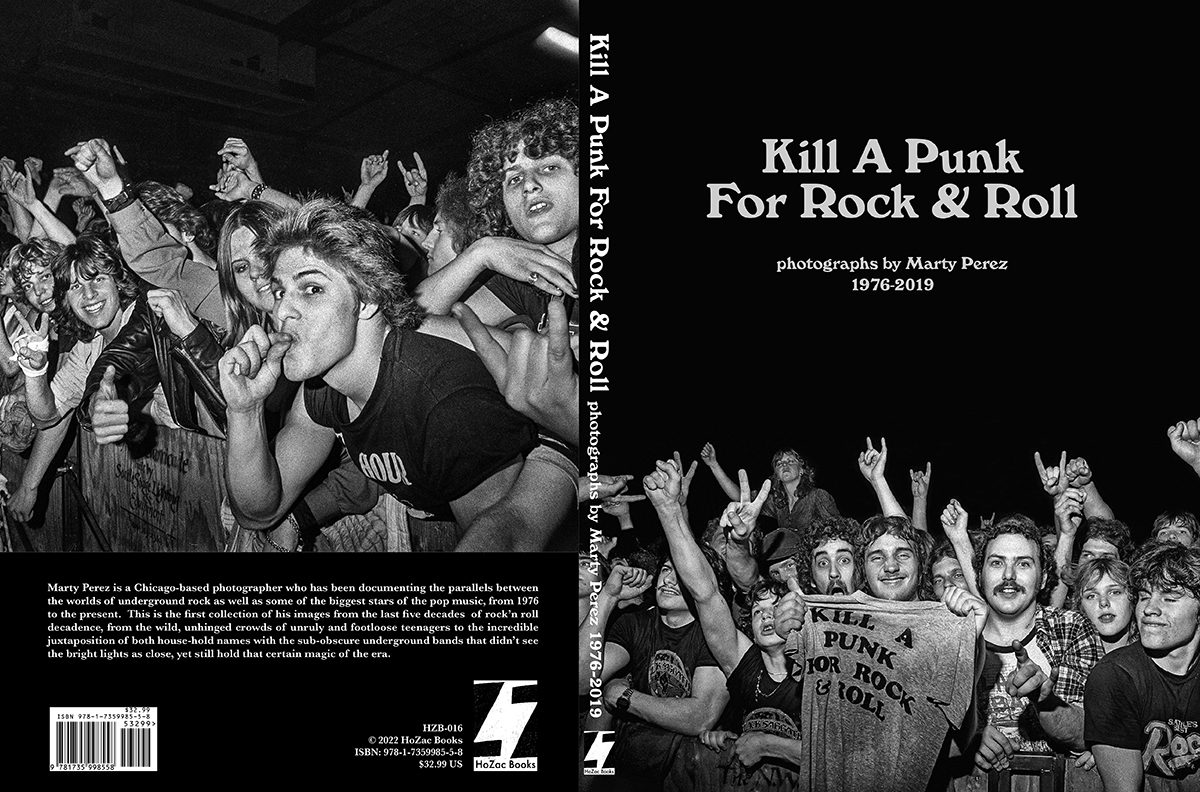 As a lifelong music critic and journalist—and, hell, as a fan!—I’ve always had a problem with the work of some of my lens-toting colleagues, among them plenty of the most-acclaimed names in the field. Too many rock photogs see their job as immortalizing the golden gods, picturing musicians we admire (and plenty we don’t) as some combination of religious icons and the giants carved into granite on the side of Mount Rushmore.

Forced to choose one word, and only one, to describe the work of my friend Marty Perez, it’s the opposite of those: human. Weaned on classic rock on the South Side of Chicago, the punk scene of the mid-to-late-’70s did more to shape Marty’s musical tastes and view of the world, while the indie-rock that followed in the ’80s honed them. Celebrating music as community, he’s D.I.Y. because ain’t nobody else gonna to do it for him, and he’s alternative, not in what became the marketing sense of the term, but in epitomizing what it originally implied: unique, distinctive, unforgettable, and one of a kind.

He’s blushing now, but that’s part of this gentle giant’s charm. Despite his enormous talent, he’s the kind of guy who’ll not only help you change a flat tire without a jack in the pouring rain, but he’ll walk a mile to do it. Self-effacing to a flaw, he hadn’t even thought of including a bio in this incredible book until I suggested that he really should, when I called to check a few facts for this intro. In case he doesn’t actually write one, here’s a brief recap of a fascinating life.

Raised in Prairie Shores and Beverly, Marty turned away from studying marine biology in Washington state during his first stint in college, choosing instead to work at a second-hand record store in Seattle during the years just before the explosion of what no one with taste ever seriously called grunge. He labored as a commercial diver for a time in New Orleans, the third great American music city he’s called home, then returned to Chicago and did a stint at Columbia College, although he admits he never really clicked with that school’s celebrated photography department. Through it all, he shot the bands he loved, and most of what he learned he gleaned from the front of the stage in the photo pit.

Photography has never paid the bills—“I’ve always needed a job with benefits,” he shrugs—but the day gigs have provided Marty the freedom to shoot for passion, not filthy lucre. He’s always shared his work with as many labors of love (including the fanzine Non-Stop Banter) as more “pro” endeavors, even after he started to get regular assignments from our mutual pal Bill Wyman at The Chicago Reader, as well as from its competing weekly New City, and even occasionally some glossies, like Chicago Magazine.

What to say about this beautiful tome, given that the pictures eloquently speak for themselves? I love that it spans five decades, with the most recent shots showing as much energy and signature flair as the earliest work. I love that Marty captures the essential core of stadium-rockers as thoroughly, lovingly, and accurately (no myth-making!) as the bands playing shit-hole dives, and that he doesn’t see—or hear—a distinction. I love that there’s as much soul and honesty in the live shots as there is in the profiles/portraits (and damn, I miss his loft-space studio in Pilsen, from which the forces of gentrification eventually drove him, just as they’ve shuttered a fair number of the venues seen in these pages). I love that there’s a half-dozen bands here that I’ve never heard of, but the photos—and, no doubt, the sounds—are as cool as those of the rock superstars and blues legends. And I especially love the photos of fans and security personnel—damn, that celebrated shot on the cover!—because they underscore his aesthetic, that punk/D.I.Y. thing I mentioned earlier.

In Marty’s viewfinder, everybody is a regular Joe, and everybody is a star. The irony, of course, is that one star in this book shines brighter than all the others, though he’d be the last to say that, which I suppose is why I’m here. It’s an honor to know you, Marty, and long may our lives be richer from seeing the world the way you do.

(co-host of Sound Opinions and the author of numerous books about music, including
Let It Blurt: The Life and Times of Lester Bangs, America’s Greatest Rock Critic,
and his latest, Soulless: The Case Against R. Kelly.)