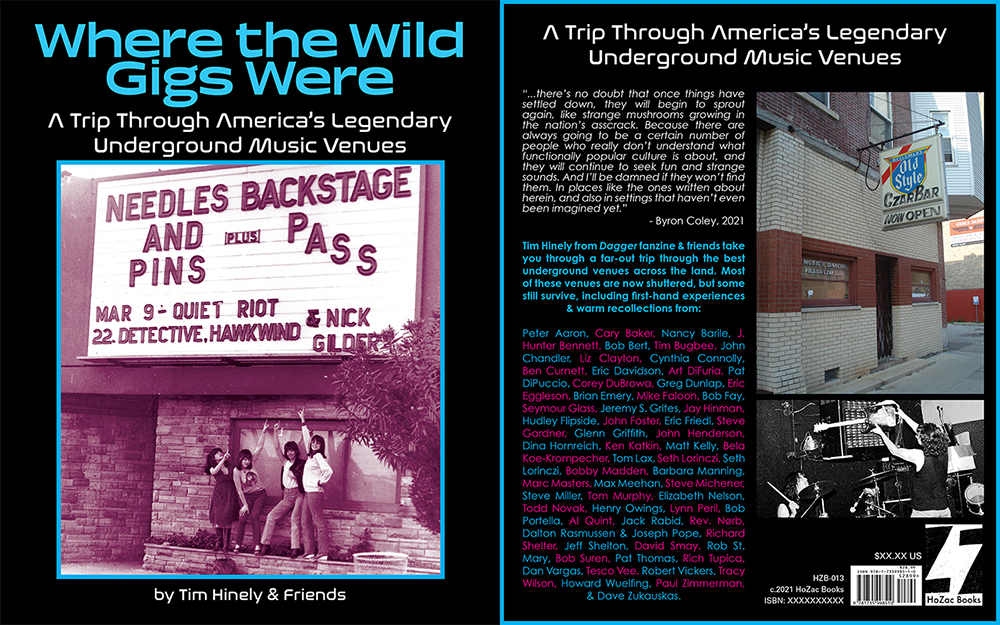 When Tim from Dagger zine approached us about his book idea covering long-loved “spaces” held sacred for countless music fans, we knew it was a great project to get behind, Similar in its community effort to our last book release (The White Label Promo Preservation Society), Hinely organized an incredible list of contributors from all stripes of the underground music spectrum, each waxing their own warm recollections of wild nights seeing life-changing bands and/or terrible bathroom experiences.

Chock full of photos, original newspaper ads, flyers, and long-lost monthly calendars of the pre-Internet age, WHERE THE WILD GIGS WERE illustrates how important these sacred spaces really are, and how much it’s noticable when we can’t actually be AT these homes-away-from-home, spread all across the USA. From Stache’s in Columbus, OH to Flynn’s Ocean 71 in Miami, FL (the ‘CBGB’s on the beach’), back to The Brewery in Lansing MI (complete with previously unpublished Stooges photos!), to City Gardens in Trenton, NJ (staffed by Comedy Central’s Jon Stewart) to Peter Aaron’s sordid details on the mob-run Jockey Club in Newport, KY, you won’t find many dull moments as each page bleeds into the next, oozing with recollections of blurry good times and endless excitement before the world changed, as we know it,

With a Foreword by Byron Coley and an Afterword by Tesco Vee, you can just imagine how good it gets in between.

“Historically, “alternative music venues” (colloquially known as punk clubs) are known for a few things. These include lousy bathrooms, loose policing, mean soundmen, and treacherous load-ins. But for all that (and more), such hangouts are amazing places to discover the kind of music you weren’t really sure existed. The kind of messed-up sounds that exactly match the confusion of whatever era you happen to grow up in.

Sometimes these are dive bars in parts of town parents described as “dangerous” when you were a kid. It might take a few beers and several co-conspirators to get up the nerve to actually visit them for the first time. Sometimes they’re just established music clubs that get a new, enlightened booking agent for a spell. Sometimes they’re just random places that have some bands during a brief period, for reasons that can’t quite be augured. Whatever their initial draw might be, these venues all share the ability to turn people on to new music, and in doing so they often assume the aura of a personal clubhouse, regardless of the quality of their commodes.

…Writing this now, when so many of the current places that put on weird-ass shows are shuttered, some for good, it’s easy to imagine the era of great underground clubs is over. But there’s no doubt that once things have settled down, they will begin to sprout again, like strange mushrooms growing in the nation’s asscrack. Because there are always going to be a certain number of people who really don’t understand what functionally popular culture is about, and they will continue to seek fun and strange sounds. And I’ll be damned if they won’t find them. In places like the ones written about herein and also in settings that haven’t even been imagined yet.”