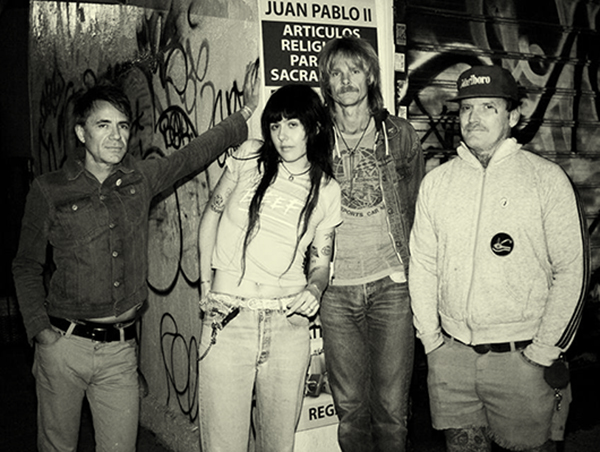 Well look at this, a Brooklyn band that isn’t taking itself too seriously and is somehow actually dripping, and/or seething with raw punk ooze??? Look no further than Surfbort, a rock’n roll mutation with living, breathing, tentacles of terror, and even and traces of Texas punk royalty. Started a few years back and with only one EP under their belt, band leader Dani Miller is a one-of-a-kind force of nature both onstage and on record, as her presence just leaps right out of the grooves and clocks you in the face immediately. The music is stripped raw, painfully precious mid-tempo punk, all salty & agitated, not far off from the late 70s vibe of The Eyes, and if that wasn’t enough, they’ve got Sean Powell (The Chumps, FuckEmos) on drums and Dave Head (Motards, Headache City, White+Outs) on guitar, to round out the ringers in the rhythm section. Dani’s vocals are right where they need to be, front and center and commanding from the get-go, the perfect snarl of 70s punk lingering on the edge of early hardcore, but holding onto that impeccable tension that’s usually sorely lacking in most cases. She’s got to be one of the best aggressive vocalists of recent note and the deranged delivery is a taste of pure punk honey that you won’t forget.

There’s no compromise here, all four tracks complete a monolith of primitive modern anger and absolutely no restraint, yet somehow this band’s fanbase is growing, and we couldn’t be more excited than to get their new EP out into your ear holes before the blood inevitably comes gushing out. Surfbort is MUCH more than a sex position in a bathtub, it’s a brutal slap in the face of humanity, and it’s a blistering rage of antagonism in a world we can’t escape. THIS IS PUNK THE PUNK YOU’VE BEEN WAITING FOR. – Victimoftime.com