LEATHER TOWEL came together in 2011 at Wooly Bully, the best record/comix store in Melbourne at the time. It was where Johnny Fitness (guitar, sandwiches) employed The Wuss (bass, barista), Per Person (drums) would take his family on weekends and The Lover (vocals, guitar), would crash on visits up from Geelong. The members of LEATHER TOWEL variously played and still play in Nun, Ooga Boogas, Ausmuteants, Exhaustion, Woollen Kits, Knife Fight and Hierophants. A veritable cavalcade of Weird Punk talent who got together to play hardcore but ended up as a clanging mess of a band travelling six ways at once, stumbling headlong in perfect cohesion at 200kmh. Leather Towel IV is their debut album, twelve songs of white-hot punk scorch that plays out in eighteen minutes. Songs about the cinema, love, fast food and Yoko’s righteous takedown. The most outrageously (fake) punk band any of these jokers have played in and the most bonkers record you will hear all year.

At first blast, the AUSMUTEANTS instantly come to mind before anything else, and of course, that’s due to that very same band’s Jake “The Lover” Robertson’s brash and unhinged vocals & guitar interchange splattering his guts across the room. But this project has far more nuance and panache, as noted by the inclusion of cohorts from NUN, EXHAUSION and OOGA BOOGAS will attest, an attempted swipe at the hardcore template, yet thrown off-balance due to the amount of truck stop cheese whiz and vertigo oozing out of these unhinged scatterbombs as they screech across both sides of this frantic debut LP. It’s an evolved hardcore record for the non-mysterious guy, and the post-punk side trips don’t hurt the effort one bit, further channeling the GORDONS-esque downstrokes and brackish, ugly rhythms which lead to an ultimate climax of irreversible malaise.

It’s not like LEATHER TOWEL need to prove anything, but they went out of their way to do so anyway, removing any further doubt as to the potency and virility of the Australian underground we all know and love, so don’t just fantasize about it, get SNAPPED by LEATHER TOWEL and feel the sting of the real thing, screaming, throbbing, and hanging on for dear life. Also this is the fanciest LP jacket we’ve ever been a part of, better put on some nice slacks, chump. 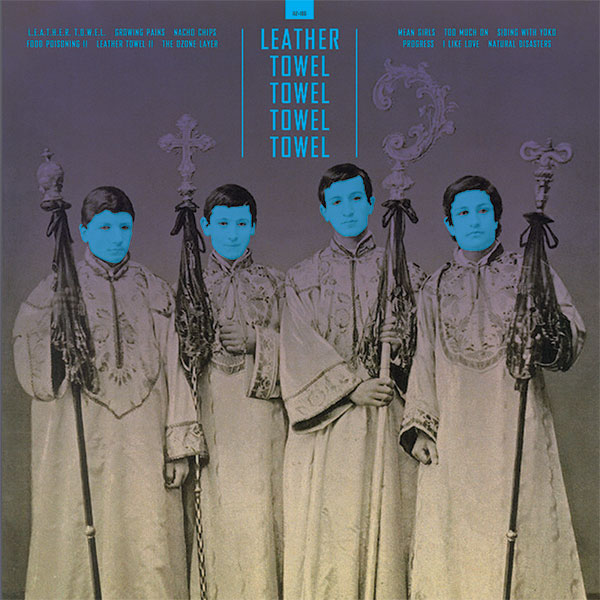